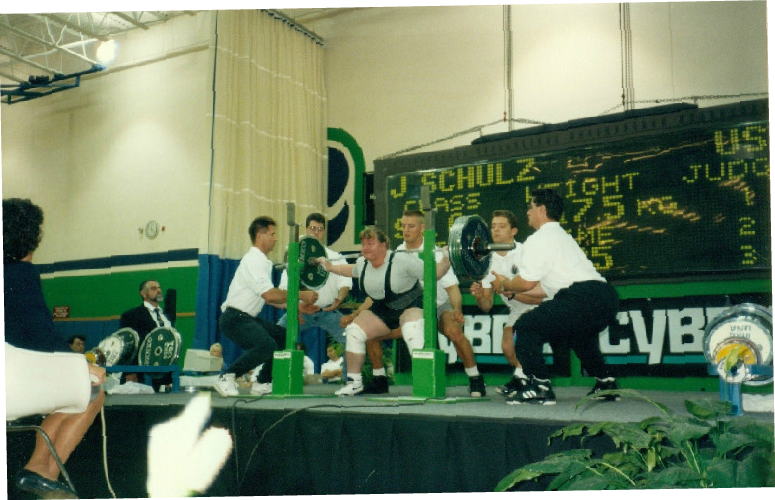 Julie started lifting in 1980 at 18 years old whilst going to school at NDSU for biology and athletic training. After completing the physical therapy at Mayo Clinic in 1987, she moved back to Fargo to work at Dakota Hospital. She started lifting at Gold’s Gym where she met several lifters that were doing  lifting. Her first competition was a 1989 bench contest in Winona, MN. This is where she met a group of lifters who pushed her into competing at the national level.

From 1990 through 1994, Julie competed at two APF nationals, two ADFPA nationals, and two World Championships! She is the 1994 ADFPA National Champion and a two time World Champion, having won both the 1991 WPC Worlds in Las Vegas and the 1994 World Drug-Free Powerlifting Federation Championships (WDFPF) in Minneapolis, MN. In 1994, she squatted 485 for the ADFPA American record! Later that year, she broke the World record with a 479 pound squat! Julie also competed in several local meets in North Dakota, Minnesota, and Wisconsin. It was a great run.

In 1995, Julie left Fargo to do traveling physical therapy that took her across the country. This made consistent training difficult. Unfortunately, a racquetball injury and subsequent knee surgery ended her competitive powerlifting career.

Currently, Julie is employed as a physical therapist at Jamestown Regional Medical Center in Jamestown, ND. She still gets to the gym on a fairly regular basis and is hoping to do some competitive benching in the future now that she has hit the master’s division.